If you are one of those people who cannot y bear cold weather, planning a trip to Yunnan province of China is probably a good idea to avoid too low temperatures. Many people consider Yunnan as the most beautiful province of the country, because of its vegetation and the low pollution rates. Indeed, Yunnan province has not gone through the rough development that involved the Northern and Eastern areas of China, it is considered a more rural area, and the natural landscape is well preserved.

There are many places to visit in Yunnan. For example, Kunming is a famous metropolis in the province; there is located the main campus of Yunnan University. However, in this post I want to share my experience in one of the smallest city in Yunnan, Xishuangbanna (西双版纳), well known for the variety of the ethnic groups that make up the city’s population.
Here is some information: everyone knows that China’s population rate is the highest in the world, but not many people know that in the Chinese people can be distinguished 56 different ethnic groups. Most of the Chinese people belong to the Hanzu (汉族)，which is the reason why in many cases the character 汉 is used to refer to things directly related to Chinese culture (for example 汉子，Chinese characters). If you want to learn more about the other ethnic minority, Xishuangbanna is the right place to go.

During our stay in Xishuangbanna, we’ve decided to visit the Dai Minority village (傣族乡村). The Dai ethnic minority of China is closely related to Lao and Thai people, alias the two major ethnic groups in Laos and Thailand. If you are interested in an exhaustive introduction guide about the Dai Minority, I suggest the one by chinatravel.com, on this page you will find many curiosities about this people and useful suggestions on etiquettes rules that tourists should respect. 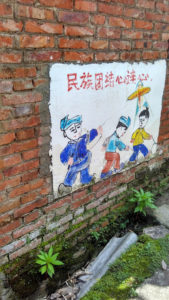 The village we visited is not far from the city center of Xishuangbanna. We were traveling during the holidays, precisely one day before the Autumn Festival (中秋节), which this year happened to coincide with the anniversary of the Republic’s foundation （国庆节）. To avoid too much confusion on the public transport (typical of China, especially during the holidays), we’ve decided to rent a taxi for the full day. We were seven people in total, and we rent a car for the price of 460￥, which is a reasonable price considering that we needed a bigger car, and the taxi was at our disposition for the whole day. The only convenient was that we were seven people, and the car we rented had seven seats including the driver; therefore we had to squeeze a little during the ride. We left from our hostel, which was located near the city center, and it took us about one hour to arrive at the entrance of the Dai Village.

Being this a village where people actually leave, there is no entrance fee. However, a big part of the village’s economy has its center in the person of the tourist: restaurants, small hotels, shops, they represent a significant source of income for the people living in the village.
One of the first things that hit you up when you arrive there is the beauty of the tropical vegetation the village is immersed in. The landscape is typical of Yunnan’s countryside. 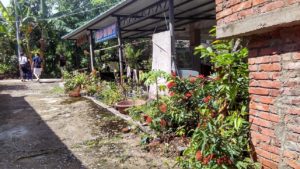 In this village it is interesting to look at the signs: as it is the common habit in Xishuangbanna too, they are written in two languages. The first one is the Mandarin Chinese, also known as 普通话，the second one is the language of Dai people, Tai Lü language, 傣仂语 (Dǎilèyǔ). 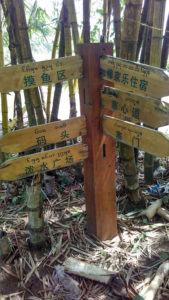 Our experience in the village has been short but intense, we only had one half day trip there, but it is possible to stay longer if you decide to rent a room in one of the hotels inside the village. We spent our day following the paths randomly. We ended up in a tiny workshop owned by an old lady (she was tiny as well). She was selling manufactural products made with rice paper, everything inside the shop was her creation.

As we were looking around, we noticed a few framed pictures made with rice paper and pieces of flowers and leaves. The lady saw our interest, and she said that she could teach us how to make one on our own, and we could bring it home with us for the price of 10￥each. Such a bargain, who would not accept?

So we ended up sitting on small stools, with our hands in containers full of water and fragments of paper. After we finished designing our picture, we left it in the frames to dry in the sunshine, planning to go pick them up later in the afternoon.

After less than a kilometer, we found another workshop to work with the clay. Same as before: we could create our creation and then bring it home for 10￥. We thought it could be fun too. So we spent a couple of hours there with a craftsman explaining to us how to work the clay (and making our attempts at creating cups a little less pathetic).
After this second long stop, it was past lunchtime, and we were quite hungry. At the beginning we were planning to go back to the city for lunch, but because we were quite late and had to wait for the clay to dry a little anyway, we decided to have lunch inside the village.

Unfortunately, many restaurants were closed due to the holiday, but we managed to find a good one for a very convenient price. We ordered eight dishes plus seven rice portions, paying 24￥per person. We were all satisfied in the end. However, if you are planning to go outside of a holiday period, you might be more likely to find restaurants which offer typical dishes of the Dai people. Many of them include insects, but in these cases daring often pays off. 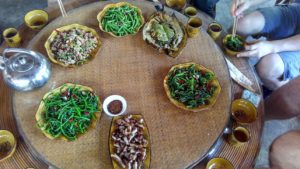 After lunch we had to leave the village, so we jumped on our seven-seats-car and squeezed together for a ride back to Xishuangbanna. So it ended our short visit to the Dai Minority Village.
I hope you found the information you were looking for in this post, but most importantly reading it arose your curiosity about the many ethnic minorities that make up the Chinese population. The Dai people is only an example of the cultural variety we can find in the vast country of China, and traveling is the best way to learn about that! It is worth to be curious about that 😊