Qingdao is one of the most beautiful cities in Shandong province: there is history, a beautiful architecture, museums, the beach, pubs. It worth visiting it.

The peak touristic season for Qingdao is in the summertime because it has the most famous seaside in Shandong province, and the weather doesn’t get too hot, so it is a good option for an easy drive if you live nearby. However, we have recently been in Qingdao for the weekend to celebrate our friend’s birthday, and we had a great time: this city maintains its charm also in the cold weather.

So here is the reason for this post: who said that cities on the seaside are worth to be visited only in summer? I am from one of them as well, and I can say that tourists coming to Trapani in winter (although not many) are never disappointed. If you want to know more about Trapani, click here to read my article 🙂

Some people might think that besides sunbathing or other outdoors activities there is not much to do… But if you decide to visit Qingdao in winter, what would you choose to do?

Before starting with the listing, Qingdao’s allure deserves to spend a little on it. One important thing to mention is that, as I said above, the city’s history has influenced its culture and appearance. If you want to learn more about it, this article by China Daily is an exhaustive source which resumes the essential information.

Personally, what that hits me the most is the city’s architecture. As soon as you get out of the central train station, it is immediately clear how the German domination has influenced it. Qingdao’s buildings merge the Chinese style and the German one, a characteristic feature that I haven’t seen anywhere else. Among Qingdao’s visitors, many people consider the city to “have an identity,” more than the majority of other cities in China, and this can be seen in different aspects.

So, let’s begin our small tour.

Number One: having a walk in May Fourth Square (五四广场)

The square is located in Qingdao’s central business district. It is mainly recognized for its red sculpture, “Wind of May.” The bright color of the sculpture, the blue sky (if you’re lucky) and the beach make the square a place to go for a relaxing walk in the weekend. If it’s a sunny day, you’ll see children playing around the sculpture and kites flying in the sky. Moreover, there is a scenic spot surrounded by the sea. Although this is not the bathing spot, you can still have a walk on the beach, and take pretty pictures with the red sculpture in the background. 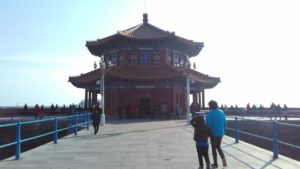 This is my favorite spot in Qingdao. Zhan Qiao is a pier the stretches into the sea on the southern coastline of the city. Why is it special? First, because of the pavilion that stands at the end of the pier, which many consider the symbol of Qingdao. The visit inside is a free entrance, inside you will find a tiny museum with pictures that show the history of the pier’s construction and the German domination.

One more thing that makes Qingdao unique in winter: you can see seagulls in beach surrounding the pier. The bravest tourists often like venturing out on the edge of the coastline to feed them.

Zhang Qiao is one of the liveliest areas of the city as concerns food. Besides the restaurants (where you can bring your fish or seafood and ask the chef to cook it for you), it is clear that Qingdao has a surprisingly strong coffee culture: probably as a result of the western influence, there are many good cafeterias and bakeries. Sitting in a warm cafeteria, with a good coffee in your hands, while chatting with your friends and looking at the sea, can restore you after a long walk in the cold weather. 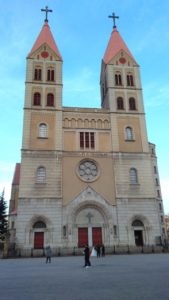 Catholicism is quite spread in China, although not as much as Buddhism. In many Chinese cities there are Catholic cathedrals, the one in Qingdao has a peculiar German taste. I’ve been there with some German friends, and they agreed that it looks very similar to how a church would look like in their country. However, it is still possible to recognize the “Chinese touch” in some of the decorations, especially in the paintings.

Number Four: having a tour of the Qingdao Beer Museum (青岛啤酒博物馆)

“Give me one hour, and I will return you 100 years” is the museum’s slogan, meaning that in a one-hour tour you can learn about 100 years of Qingdao beer’s history.

Of course, one of the reasons why Qingdao is famous in China is its brewery, founded by German people, who have transferred their beer culture to the city. Nowadays, Qingdao beer is one of the most famous and successful Chinese brands for beer, and no one can go to the city without visiting its beer museum. The Museum is divided into two sections: Section A and Section B. The first one introduces you to the history of the beer, of how the brand was founded and how it developed during the years; the latter shows you how the production process works, ending with a lounge section where visitors can sample freshly brewed beers for free. It’s a fun experience for everyone: it gives you the possibility to learn more about one of the most successful Chinese brands and to actually taste the culture behind it. The little dancing shows offered by the Museum’s staff are just the cherry on top.

Number Five: getting wasted in a pub

Why? Because Qingdao there is a bit of a drinking culture in Qingdao, there are many pubs and they’re easy to find. A special mention goes to the Beer street where the brewery is located: there you can see many European-style bars where the locals hang out together, or buy beers that they take away in plastic bags (yes this is how you do it in Qingdao!!). Besides that, the pubs around the city are often cozy and not too expensive, which makes the Qingdao just as fun as other big cities in China but more affordable 😉

And that’s the end of my list! Qingdao is such a beautiful city, let’s not let the cold weather stop us from traveling! Of course, there are many options that I haven’t mentioned, but feel free to add your suggestions in the comments below! I am looking forward to reading them 😊