This is a tale that begins a while ago, months before we planned our trip to Yunnan.

Having the fortune of being international students in China for one year, we had plenty of occasions to travel, and we were as well very determined not to miss a chance. The only obstacle was that when you’re attending any course in a Chinese University, attendance is almost always compulsory. Therefore the time to travel around was not that much in the end. We started our study abroad experience in February, Chinese New Year was already gone. Therefore the first real holiday happened to be Qingmingjie （清明节）, in April. That time we have been in Xi’an for about four days, and for most of us, it was the first time in the city, so we really enjoyed it. Xi’an is an ancient city full of history, there found its location the tomb of the first emperor of China (also known as Qin Shi Huangdi), just to mention one of the attractions. You can find the terracotta army in Xi’an, you can see the Muslim communities of China there, and last but not least, the street food there is one best kind you can find in China.
So what did impress us the most in our first visit to Xi’an?

A noodles restaurant，named 永佳岐山面.
Why? Because I have been living in China for almost one year by now, and those remain the best noodles I have ever had the pleasure to eat. Quite remarkable, if you consider that I am a noodles lover (although not, they do not remind me of spaghetti, and I don’t like them because I’m Italian), and I have had at least a bowl of noodles in all the cities I’ve been visiting in China.
This restaurant was hidden in a tiny street typical of Xi’an city center, about 20 minutes’ walk from the Drum Tower, one of the main attractions of Xi’an. We ended up there more or less by chance, after a long day of walking in the city, so we were famished. Finding this cute old lady taking our orders and bringing to each one of us a bowl of warm and super tasty hand-made noodles, it’s been a lovely welcome. We tried different kind of noodles (dry ones, with soup, wide ones, thick ones, thin ones…), and they were all super cheap: between 10 and 15 yuan per bowl. A top place. 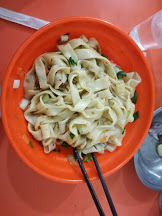 This an example of the noodles we got in the restaurant!

And here we get to the second part of our story, which takes place during the National Holiday of China. We were heading to Yunnan province, our last destination was the small city of Xishuangbanna （西双版纳）, which is though quite difficult to reach. To get there, we took a plane that stopped first in Xi’an and then in Kunming, we arrived in Xi’an in the morning, and we were quite in the mood for a good lunch. Since we had about 8 hours to kill before the next flight, so we decided to give it a try to find that noodles restaurant that impressed us a few months before.

First, we needed a taxi to the center. Here is my tip: NEVER EVER TRUST sketchy taxi driver that comes to you at the arrivals trying to sell you “a cheap ride.” Not only they’re fooling you most of the times, but they’re not even giving you any receipt, so they’re evading the taxes.

So, we were seven people, and we agreed to get two taxis to the Drum tower. What we were not expecting was that we took about one hour to get into the center, because of the massive amount of people that were leaving the city that day. Everyone knows that China is a highly populated country, but not everyone realizes how difficult traveling in China during Chinese holidays, especially for long holidays such as the anniversary of the Republic’s foundation (国庆节). Plus, this year the anniversary was coinciding with the Autumn festival (中秋节), another significant Chinese celebration that follows the lunar calendar, therefore changes every year. Both holidays are among the most important in China, so the crowd was guaranteed.

As a result, we got caught in a traffic jam: we were heading from the airport to the city, as a ton of other tourists was doing: as I was mentioning before, Xi’an is one of the biggest touristic centres in China, due to its long history and the presence of Qin Shi Huangdi’s mausoleum and the Terracotta Army. Moreover, we were traveling on the first weekend of the holiday, no surprise that our taxi ride was taking forever and we barely moved.
It has to be mentioned that there are also other ways to get into the center. Our little trip was quite improvised, so we chose to go by taxi because we were carrying heavy backpacks with us, and we were aiming to a specific place so we thought it’d had been the fastest/most convenient option. But there are also buses from the airport to the Drum tower specifically, for the price of 20 yuan (we chose to get the taxi anyway because we were sharing so it wouldn’t have been much more expensive). Besides that, a smart way to avoid traffic is to go by subway: it is not the most convenient option in normal conditions but it’s the cheapest way to get to the center, and you’d avoid the traffic jam (not the crowd of people though). Or even, you could decide to take a taxi to a specific spot and then take the subway only to avoid the most critical areas.

As I said before, we splatted into two taxis. After we realized we were taking so long to get to the Drum tower, we were considering getting out of the taxi and just walk: it would have probably been faster. People in Taxi A decided to stay inside the cab and be patient, people in Taxi B chose to walk. In the end, because the jam extended only till the ancient walls of the city people in Taxi A managed to get to the Drum tower about 20 minutes before Taxi B. There was not a big difference in the price we paid anyway, about 10-20 yuan.
It started raining as soon as we arrived, but the spirit was high: we were craving for the best bowl of noodles ever. Fortunately, one friend of ours is very good at orienteering even if we had no correct address for that restaurant, and although we had been there only one time many months ago, she could still find the way to get there without any hesitation.

So we walked from the Drum tower for about 20 minutes, under the rain, and we finally got to the tiny street where the restaurant was. We kept going, eventually spotting the entrance of the restaurant and… 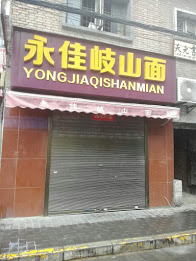 We should have expected that the restaurant could have been closed for the holidays, although when we went there the first time, it was the period of vacations as well… Also, we did not have much time to find a substitute restaurant for lunch, since there was so much traffic we needed to be quick not to risk to miss the flight to Yunnan. Therefore, we just entered in a random restaurant next to the other one, and we got some bowl of noodles there. Needless to say, it wasn’t good as the one we were aiming for, not even close to that, but still not bad, and a proper quality/price rating.
In the end, we decided to go back to airport by bus, and we managed to get the flight without any struggle since getting to the airport was not as difficult as getting into the city.
The whole story took place in about seven hours, here is a resume of the time and money expenses and the exact location of the restaurant: 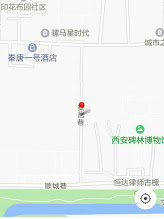 So, if you ever find yourselves being in the Xi’an’s airport, hungry and with a lot of hours to kill, I recommend you to have a quick escape in the city and try this place for the best noodles experience ever! It shouldn’t be difficult to get there, especially in a ferial day when traffic jams are less frequent. Wish you the best of luck!!