Here I am once again talking about one of the enchanting beauties of my hometown. Those who have been following my blog for a while already know how passionate I am about Trapani (which I have described in details in this article for Travelista) and Sicily in general. Although I’ve traveled to many places, I am still amazed by the uniqueness of the place where I was born.

In this post I will introduce you to one of  Trapani’s historical buildings: Ligny Tower. There is a lot to be said about it. However, I am not a specialist hence I have used other websites as references to provide a decent overview of the tower’s history and its most important features (the websites I used are trapaniistruzioniperluso and turismotrapani.net). 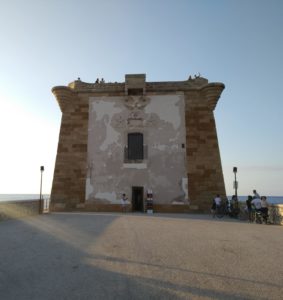 The history and structure of the building

Ligny Tower’s construction dates back to the year 1671, when Claudio La Moraldo, Prince of Ligny and viceroy of the Two Sicilies Kingdom ordered the edification of a tower as a defense for the city of Trapani. Hence the building was born as a coastal fortress in Spanish style (as a matter of fact, Sicily experienced a period of Spanish domination between the XVI and XVIII Century).

The core structure of the tower is made out of stone and tuff, collected from Favignana, one of the Egadi Islands. The building is divided into three levels: the ground floor is characterized by a barrel vault, a stone staircase brings the visitors up to the first floor and the top terrace, which is opened to the visitors as well. The prospectus is characterized by stone walls.

Throughout the centuries, Ligny Tower’s function has changed several times. It served as a deflection tower during the XVIII century, due to its advantageous position with a view on the Egadi Islands. In 1865 the tower was transferred to Trapani’s town hall ownership, and since then its uses have been multiples: it became a lighthouse, a telegraph station, a traffic light station; until it became a private residence in the ‘70s. Ligny Tower was restored in 2015, among the disputes of Trapani’s citizens who did not entirely appreciated the white plastering on the front face.

Nowadays the tower hosts a museum of antiquities, where visitors can admire cultural relics and foundings from Trapani’s territory – particularly remarkable are those from the Punic Wars in 241 a.C. The museum is managed by Associazione Euploia e Beni Culturali, which also organizes temporary exhibitions inside the tower. The entrance ticket is cheap: 1 euro to visit the museum, 2 euros to get to the terrace. The visit is recommended for tourists as well as locals and can be a plus to a regular family vacation at the beach.

The location and scenic spots

It is due to spend a few words on the spot where the tower is located. As I have already mentioned elsewhere, this the extreme point of Sicily, where the Tyrrenium Sea and the Mediterranean Sea meet each other. As you climb on the tower’s terrace, you’ll see the remains of a rocky path that leads into the water; while on the opposite side of the  tower, the one facing the city, you will see Trapani’s coast on the left side and the harbor and the Colombaia Castle on the right side, both of them framing the city center. It is a unique panorama.

Besides that, that one part of Trapani is also a perfect place for swimming and sunbathing. Many locals appreciate it so much that it gets pretty crowded during the weekends. 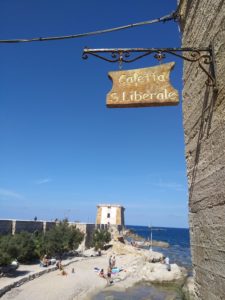 The surrounding area is suitable for a nice walk with a view on the sea: especially if you decide to visit during the weekend, you might find a wedding celebration in San Liberale’s Church, which is as small and as picturesque. The view is embellished by the tiny fishermen’s boat, who rest along the shore during the day. 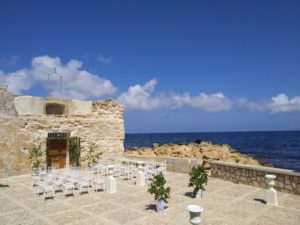 On top of that, many of the visitors enjoy the food in the neighborhood. There are couples of restaurants just by the tower and on the sidewalk by the coast, where tourists enjoy trying typical Sicilian delicacies and good fish recipes. Besides that, there are some very good gelaterie (gelato shops) which also offer granita, typical Sicilian sweet snack, deeply appreciated during the hot season. All these features make Ligny tower a place where you mix swimming, sunbathing, culture and even good Sicilian food. What else could anyone desire?

Thank you for reading this, I hope you enjoyed this post. I’m always looking forward to taking you with me to my next destination!